Windows 2008 HP ProLiant MicroServer Gen8 RAID Controller Driver 6.8.0.64 2014-03-05 It is highly recommended to always use the most recent driver version available. When I begin install windows server 2008 r2 sp1, it shows empty window with driver choose and message: 'can't to find disk driver', then I insert flashcard with raid driver controller b120i for windows server 2008 r2 from hp official site, then driver install run, but then it shows empty window with no one disk and ask disk driver again.

I'm documenting this here as I spent ~3 days on and off trying to get my head around these specific problems and there was surprisingly little on the web.

I have a HP ProLiant Gen8 G1610T which I want to use as a media server so I bought 2 x 4 TB WD RED HDDs to stripe for ~8 TB of storage capacity.

This worked fine but there was only a 2 TB partition which couldn't be extended as it was initialized as MBR.

As advised by http://www.thewindowsclub.com/convert-mbr-to-gpt-disk, I tried to convert the partition from MBR to GPT but it didn't work.

I looked for how to change the 'BIOS mode' from legacy to UEFI to allow booting to a GPT-initialized drive but, according to many sources (https://community.hpe.com/t5/ProLiant-Servers-Netservers/Microserver-Gen8-UEFI/td-p/6499756, http://homeservershow.com/forums/index.php?/topic/9643-how-to-enable-uefi-in-microserver-gen8/, https://community.hpe.com/t5/ProLiant-Servers-ML-DL-SL/ML350p-Gen-8-UEFI-bios/td-p/6293177), the only HP ProLiant Gen8 to support UEFI is the DL580.

I cleared the RAID config and did the same as attempt #1 except created seperate 250 GB and 7.75 TB RAID 0 / striped volumes and selected the former to install but this time I encountered the following errors:

Windows can't be installed on this drive (Show details)

We couldn't create a new partition or locate an existing one. For more information, see the Setup log files.

I cleared the RAID config and did the same as attempt #1 except created only a 250 GB striped volume but still encountered the same errors.

I cleared the RAID config and did the same as attempt #1 but still encountered the same errors.

During my extensive DuckDuckGo- and Google-ing, I read something that recommended removing all USB drives but I dismissed that thinking 'What? I'm installing off of a USB flash drive? How would that work?'

This is what I unknowingly did in attempt #1 - I booted into the Windows installer, saw that it didn't have a driver for the RAID controller, downloaded it on my PC to my other USB flash drive, and then connected it.

Bizarre but there you have it.

Also, I don't know if it's relevant but the problematic USB flash drive is USB 3.0 and has FalconFour installed. 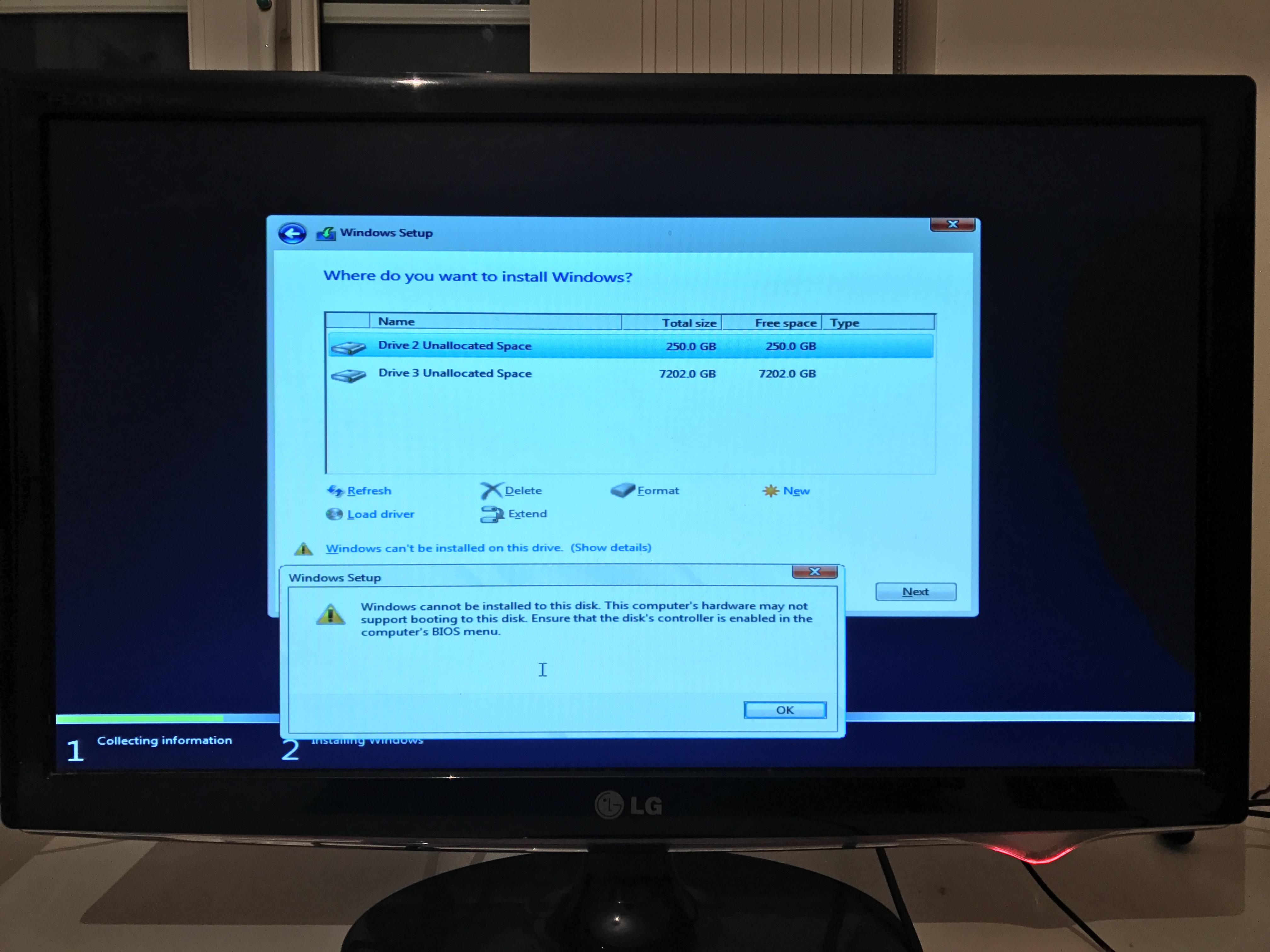 Not the answer you're looking for? Browse other questions tagged windowsraidhp-proliantwindows-server-2016 or ask your own question.