Look at this video. Just look at it. Forget the stilted narration by Bran Stark and just look at those goddamn cities and mountains. It is amazing what a group of driven people can do with enough creativity and time.

We've been following Westeroscraft—the ongoing project to build all of Game of Thrones' world in Minecraft—for quite some time now, and it continues to impress. Project lead Jacob Granberry tells me they've got about 125 active members on the server now, and thanks to manpower, organization, and a whole lot of mods, they've created something that's just straight-up spectacular. 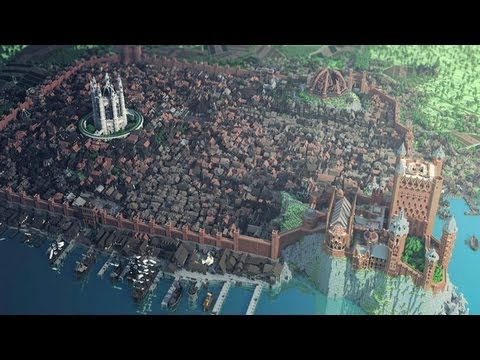 I would say the world is at around 70% completion. Since we last spoke, we've developed a custom launcher for the game that comes packed with our WesterosBlocks mod which includes over 50 new custom blocks and textures specifically made for our server. So, we completely repainted our map with new textures, and some of our old builds we are building over bigger, better, and more realistic. That Kings Landing render from a few years ago? Yea, we are remaking that entire city again.

If you want to help out on the project, go over to the Westeroscraft website. Or just watch in awe.